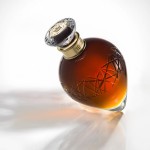 Tullibardine Distillery in Perthshire, has announced the launch of its oldest release to date as part of its new premium Custodian Whisky Collection; the 1952 Custodian Whisky

Aged for 60 years, this latest release which is limited to just 70 bottles and priced at £20,000 is being targeted at whisky connoisseurs and collectors across the world. 25 bottles have already been reserved and the rest are being offered by invitation.

Tullibardine’s Master Distillers have created a single malt that has been crafted over six decades, maturing its way through the reign of King George VI, seen through 12 British Prime Ministers, 12 US Presidents, the moon landings, Concorde and a new Millennium.

Commenting on the new release, Matthew Johns, Tullibardine’s Commercial Director, said: “This is the most exceptional single malt whisky Tullibardine has ever created. Aged for 60 years, this goes far beyond whisky, you are drinking in the history of our ancestors”.

Inspired by the ‘Tullibardine Drop’ French crystal maker Baccarat have designed and created a specially commissioned gold and crystal decanter for each of the 70 whiskies. Every Custodian of the 1952 will receive an exclusive membership card, created by luxury designer Black Astrum, makers of the world famous Diamond encrusted Signature Cards.