First up we have the BenRiach 10th Anniversary bottling is a strictly limited edition one-off bottling to commemorate a very special occasion. Back in 2004, Billy Walker and his two South African partners Geoff Bell and Wayne Kieswetter purchased BenRiach and turned it into one of Scotland’s most admired distilleries.

On September 20 that year, the first distillation under the new owners was filled to cask. Ten years on, Billy Walker has married together four outstanding casks from the first week of production to create this limited bottling, it has been bottled 46% ABV and is a limited release of only 1106 bottles. 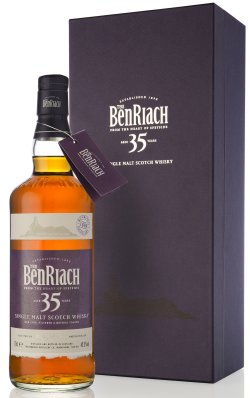 Next up is another exclusive expression – the BenRiach 35 year old.

Non-chill filtered, bottled at natural colour and at 42.5% ABV., BenRiach tell me that it superbly complements BenRiach’s award-winning 25 year old which was released in 2006. And like the 25 years old, the 35 year old is a classic Speyside, proffering some lovely fruit notes and dry spice – sweet, fruity and simply beautiful.

Billy Walker’s tasting notes show this is an exceptional malt to be consciously savoured, enjoying every stage from nose to tongue to afterglow with each sip.

Nose: Luscious tropical fruit salad syrup with a delicate ripped mint and chocolate back note; all warmed by a gentle toasted oak spice. 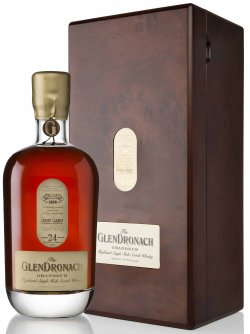 Last and certainly not least, completing the trio of special releases is Batch 6 of GlenDronach’s “Grandeur” series.

This latest batch from the Aberdeenshire distillery is a 24 year old whisky that’s been specially selected by Billy Walker from some of the oldest and most characterful Oloroso sherry casks at GlenDronach.

Bottled at 48.9% ABV and individually numbered by hand, the batch is limited to just 1180 bottles and generously filled with luscious fruity aromas, rich sherry and dark chocolate flavours.

Nose: A magnificent combination of honey-drenched dates and succulent raisins which gently ebb and flow with waves of delicate orange blossom, mint and cracked black pepper. Hints of glazed cherries and toasted almonds perfectly complement the seductive nose. A nose to be appreciated slowly and often.